A Sarabande is a slow dance in triple time.

It’s important to find a good speed in the first bar of this movement so that all the semiquavers later on don’t sound rushed. We are aiming for a feeling of serenity throughout the piece. Although the lower notes of the second spread chord are notated as minims, I don’t believe it is necessary to slur into the final quaver of the bar. This slur is not marked in any of the manuscripts and changing bow gives more space for the music to breathe. 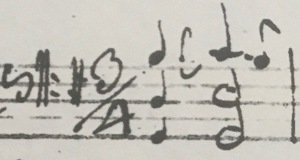 One has to plan how to spread every three note chord in the piece. Is it best to play a single bass note followed by a double stop? Or two double stops that both include the middle note? Or maybe a double stop of the bottom two notes followed by the top note alone? You could even play the three notes one at a time. It’s something to think about because it won’t necessarily sound best to play them all the same way, especially on the double bass where you are having to contend with rapid changes of string length that require marked differences of speed and weight of the bow. However you spread the chords, it is good to enjoy the lower notes.

The three crotchet (quarter note) beats of a sarabande have the pattern weak-strong-nothing as can be seen in this video.

Bach adheres strictly to this scheme in the Sarabande in the G major suite. Apart from the three cadences the harmony never changes on the third beat of the bar. It’s possible to bow almost all the movement splitting the first beat so that you have down bows on beats one and two of each bar and up bows everywhere else. This tallies pretty closely with the manuscript sources. (In the first bar where the first beat is only one note, you just need to decide whether you want to start down-down, or to begin on an up bow.)

Even though the movement only lasts 16 bars, Bach still finds room for three cadences each lasting two bars in the same places as in all the movements of this Suite from the Courante on;

The harmony changes more often in the cadences and you need two bows to each crotchet (quarter note). You can decide how much you want to bring out the hemiola feel by contrasting the strength of the last beat of bars 7, 11 & 15 with the first beat of 8, 12 & 16.

The pattern of the cadences isn’t the only way Bach’s harmony in the Sarabande quotes from other movements. The first two bars follow the same I-IV-V-I harmony as the first four bars of the Prelude. Bach drives home the point by going round the sequence again, coming back to IV, V and I on the strong second beats of bars 3, 4 and 5. So in my interpretation, the first half of the movement has rest points midway through bars 2 and 5 while the second half splits more conventionally into two halves which are each four bars long.

People who are used to playing music written in later periods might think it’s necessary to join the trills on to the notes that follow. Trills in the classical era are always followed by a resolution but in this sort of music the trills are resting points, and the notes that come after are always upbeats into a new phrase. In fact, apart from the decoration in bar 3, I think it’s best never to slur the strong second beat into any other notes.

In this movement, you will often find you have a semiquaver down bow on the first beat of a bar with longer up bows on either side. You need to zigzag through the bow, with the semiquaver taking up a small amount of bow in the middle.

It’s not a complicated thing to do, but for some reason many players get into problems by trying to get back to one of the ends of the bow. If you do this, the semiquaver gets too much bow. Mastering this style of bowing is essential for playing dotted rhythms in baroque music because hooked bowings are no longer thought stylish. Practise it by playing a repeated sicilienne rhythm.

Double bass player in London View all posts by doublebassy